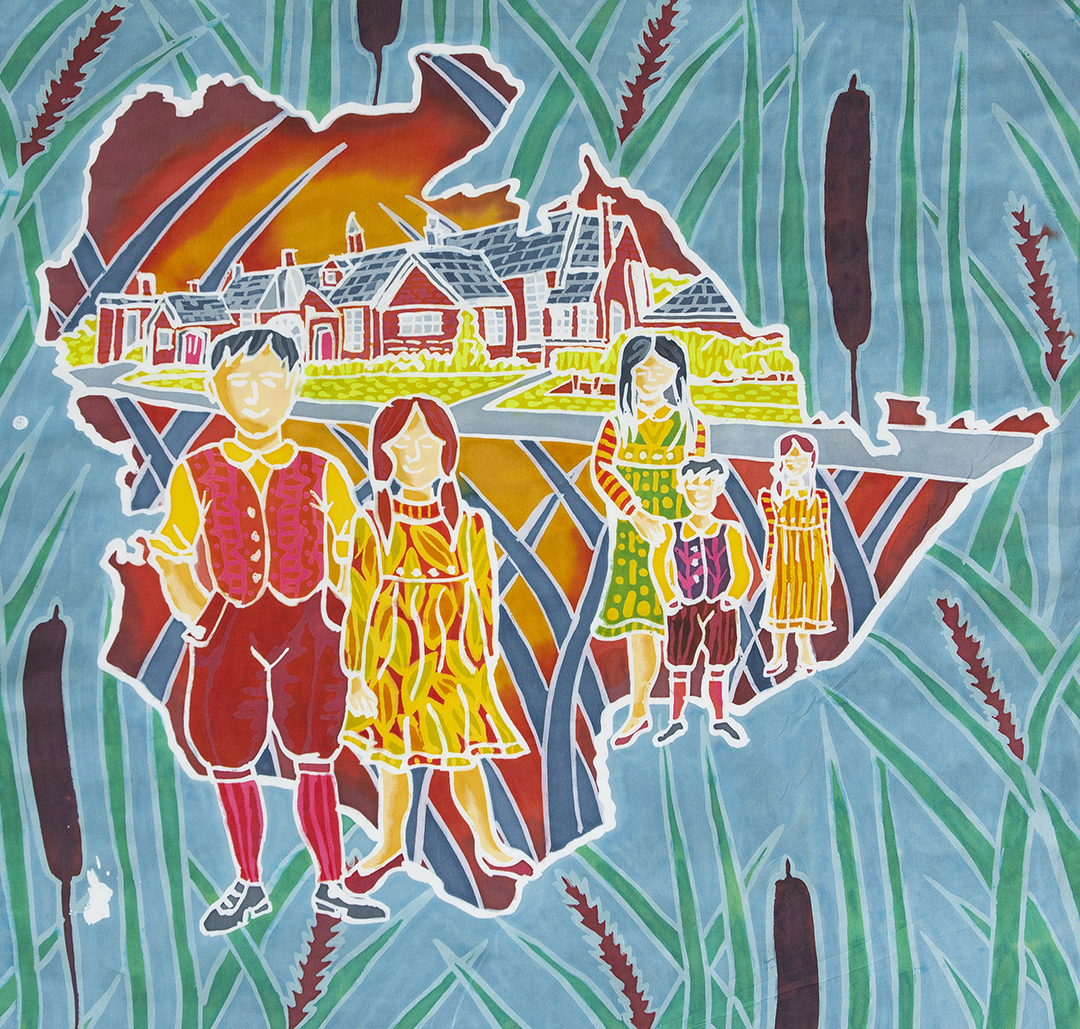 At the end of the 19th century, St Leonard’s workhouse in Shoreditch decided to adopt a cottage homes scheme to provide accommodation for children in a ‘village’ of small houses away from London. Charles Godfrey of Harrow Lodge Farm sold them an 80acre site for £6,300 in 1886 on which The Hornchurch Cottage Homes for Children were built. They closed down almost a century later in 1984. In 1990 the homes were converted into private houses and flats and became the centre of what is now known as the St Leonard’s Hamlet housing estate.

On the Workhouses.org website there is an extract from the memoir of Charles Daniel Burgess who came to live at the cottage homes in 1919 when he was 8 years old and stayed there for 3 years. His father was a stoker in the local gasworks,and one night when he was raking the dead coal from the ovens, the long-handled rake he used got stuck. He gave it a strong tug and it suddenly came loose and struck him in the stomach rupturing his internal organs. He died two days later. Charles’ mother could not afford to support her family, so places were found at the Hornchurch Cottage Homes for the three eldest children – Charles, Mary and Tom, however, Tom contracted ringworm before the departure date and so he was allowed to stay with his mother.

The entrance block of the homes on the main road was a two-storey lodge with boys’ and girls’ wards either side where new arrivals stayed for two weeks and were looked after by the porter and his wife. The children’s home itself was located a short distance away. Charles Daniel Burgess explains:

The home was in a country lane and was entered via large gates with a lodge house at the side for visitors. You entered a long drive and the first house was where the superintendent lived, further along were six cottages, each named after a famous woman. There were three each side, each housing approximately 35 girls. Then on the left were the school (which doubled as the chapel on Sundays), the swimming baths (rarely used), the gymnasium, and the drill hall. Opposite the school stood the Administration buildings [now demolished]. These consisted of the dairy, the bakery, a tailor shop and a boot-repair shop. … Next there were six more cottages named after famous men (mine was ‘Landseer’). Again, there were three each side and each was capable of housing 35 boys.

Further along from the boys’ cottages was an infirmary and two more cottages for tiny tots where Charles’s little sister Mary lived, but he hardly ever saw her because it was the policy at the homes to keep the boys and girls separated. The boys attended school in the mornings while the girls went in the afternoons, and they only came together for the Sunday service,with the girls sitting on one side and the boys on the other. Charles goes on to describe what the cottages were like inside:

Each cottage had a large entrance hall, a kitchen with a huge double oven fire grate and a dining room. There was a day room for reading, playing chess, draughts, and children’s card games. There was a plot of land at the rear …and a small playground. On the first floor of each cottage, were three dormitories… each with twelve beds, and the washroom contained three bathrooms. There was also a bedroom … for our foster parents (who we had to call’Mother’ and ‘Father’).

The children ate well at the homes, with porridge, bread and margarine, and cocoa for breakfast; and a hot meal at midday such as stew, toad-in-the-hole, or meat and two veg, followed by a hot pudding such as rice, syrup pudding or roly-poly with currants. For tea they had more bread, margarine and cocoa, with a slice of cake on Sundays. They always had a roast dinner on Sundays with all the trimmings, and if the Homes Committees from London were visiting, they also got a roast dinner midweek!

There was nothing Dickensian about the home. I never once saw corporal punishment.I can’t say that I was unhappy there – I had a clean bed to sleep in (in it at 8 o’clock and up at 6 to the sound of a bugle played by one of the band boys)…

Every summer there was a Sports Day and each cottage competed against all the others, with running, high and long jump,obstacle races, and tug-of-war.

There was a prize of a shield for the tug-of-war contest, and only two cottages competed for it – ‘Landseer’ (my cottage) and ‘Nelson’. I was always in the ‘tug’ and we won she shield almost every year.

There were also swimming races and diving, after which the fun continued:

After the competitions were finished, all the competitors dived into the pool. Then the visitors and staff would throw coins into the water and laugh at the antics of the boys trying to get to the bottom of the pool to retrieve them. After this jollity, the visitors and staff adjourned to the Drill Hall where they were served tea and cakes. Some of the boys then put on a show with Indian clubs and dumbbell drill, and the evening finished with dancing to the boys’ Military Band.

Charles Daniel Burgess’s account of living at the Hornchurch Cottages Homes shows that the scheme was a great success and that the Homes Committees clearly achieved their aim of offering a better life to destitute East London children away from the gloom of the Shoreditch workhouse.