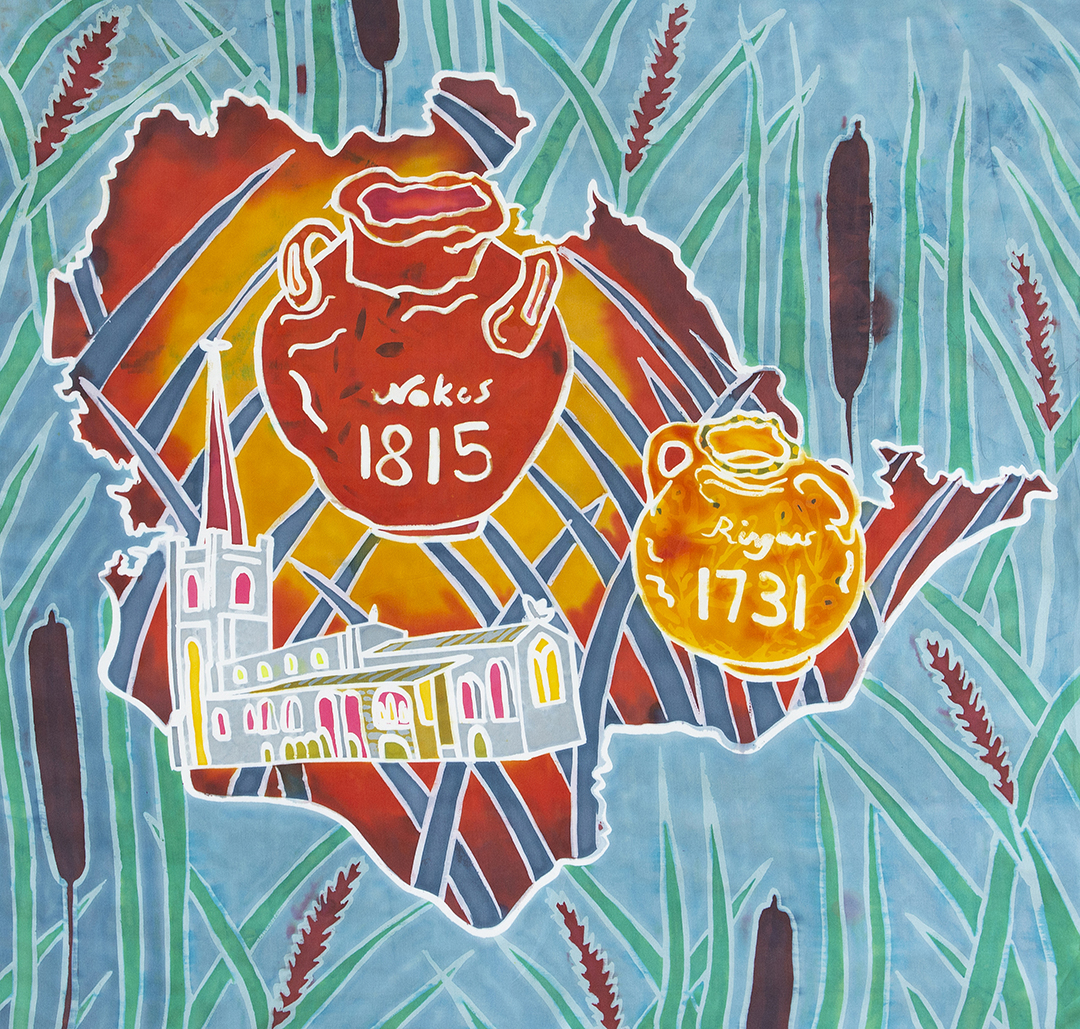 Grey Towers Avenue was the original driveway to Grey Towers House, a mock castle built by Henry Holmes in 1876, on land given to him by his father-in-law John Wagener who owned the Langtons estate. During his lifetime, Henry Holmes was a ship-builder, bank director, magistrate, join towner of the Hornchurch Brewery, member of the Essex County Council, Lieutenant-Colonel of the Artillery Volunteers and leader of various charitable organizations. In the main hall at Grey Towers he displayed a pair of antique beer jugs which had been made especially for the bell ringers of St Andrew’s Church.

Directly opposite Grey Towers Avenue, on the other side of the high street, there is a block of flats on the site of what was once The Red House, and behind it was a flourishing pottery, brick and tile works, established in the early 1700s by the Cove family. It was at this pottery and brickworks that the bell ringers’ jugs were made, one in 1731 and the other in 1815. The 1731 jug holds 4.5 gallons,and the 1815 jug holds 6.5 gallons.

The names of the bell ringers and church wardens are engraved on both jugs, and the 1815 one bears the inscription ‘Gift of Mr C. Cove’ who was the owner of the brickworks at the time. Charles Cove also owned an old iron foundry on the opposite side of the road in a location now occupied by Sainsbury’s. In 1843 this was taken over by the Wedlakeand Thompson families and renamed the Union Foundry. Robert Wedlake had established the Fairkytes Foundry in Billet Lane with his brother Thomas, but he was sacked by his sister-in-law Mary Wedlake when Thomas died in 1843, and so, with his business partner Charles Thompson,he set up the Union Foundry in direct competition with Mary Wedlake just yards away from her premises.

When Charles Thompson died two years later, his wife Ann took his place at the Union foundry. In 1847 Charles Cove died and a few months later his son, also called Charles Cove,married Ann Thompson’s daughter, also called Ann Thompson. They took over the brickworks and lived at The Red House which continued to be owned by brick-makers and builders until it was demolished in 1969 to make way for the block of flats that stands on its site today.

So how did the beer jugs end up in the main hall at Grey Towers House when the Cove family had made them specifically for the St Andrew’s bell ringers? Well, the jugs needed to be filled, so the bell ringers would take them around the village on a barrow to get them filled with beer which they drank at intervals whilst ringing the church bells. The jugs were also filled with ale brewed at Hornchurch Hall which was located opposite St Andrew’s Church and occupied by the Bearblock family, who would use the jugs to offer beer to the tenants who leased their land when they came to pay their rent. The name ‘Reverend James Bearblock’ is engraved on the 1815 bell ringers’ jug because he was the church warden at that time. The jugs were also filled at the KingsHead pub located on the high street along from Hornchurch Hall and opposite the Old Hornchurch Brewery.

Henry Holmes and his brother Benjamin owned both the Kings Head pub and the brewery. One day when the publican was late paying his rent, the Holmes brothers lost their temper, and, seeing the bell ringers’ jugs waiting to be filled with beer, they seized them and took

them back to Grey Towers. The jugs remained at Grey Towers until 1914, by which time both Henry and his wife had passed away and their house and its contents were put up for auction. Henry’s children bought back the jugs at the auction and presented them to the vicar of St Andrew’s Church, always to be kept there for the bell ringers, and that is where they remain today, although not on display to the public. In 1979 a third jug was added by the bell ringers themselves to celebrate the bicentennial of the six bells at St Andrew’s Church which were cast in 1779.

With reference to Charles Perfect and thanks to Gavin Carpenter of the St Andrew’s Hornchurch Guild of Change Ringers.