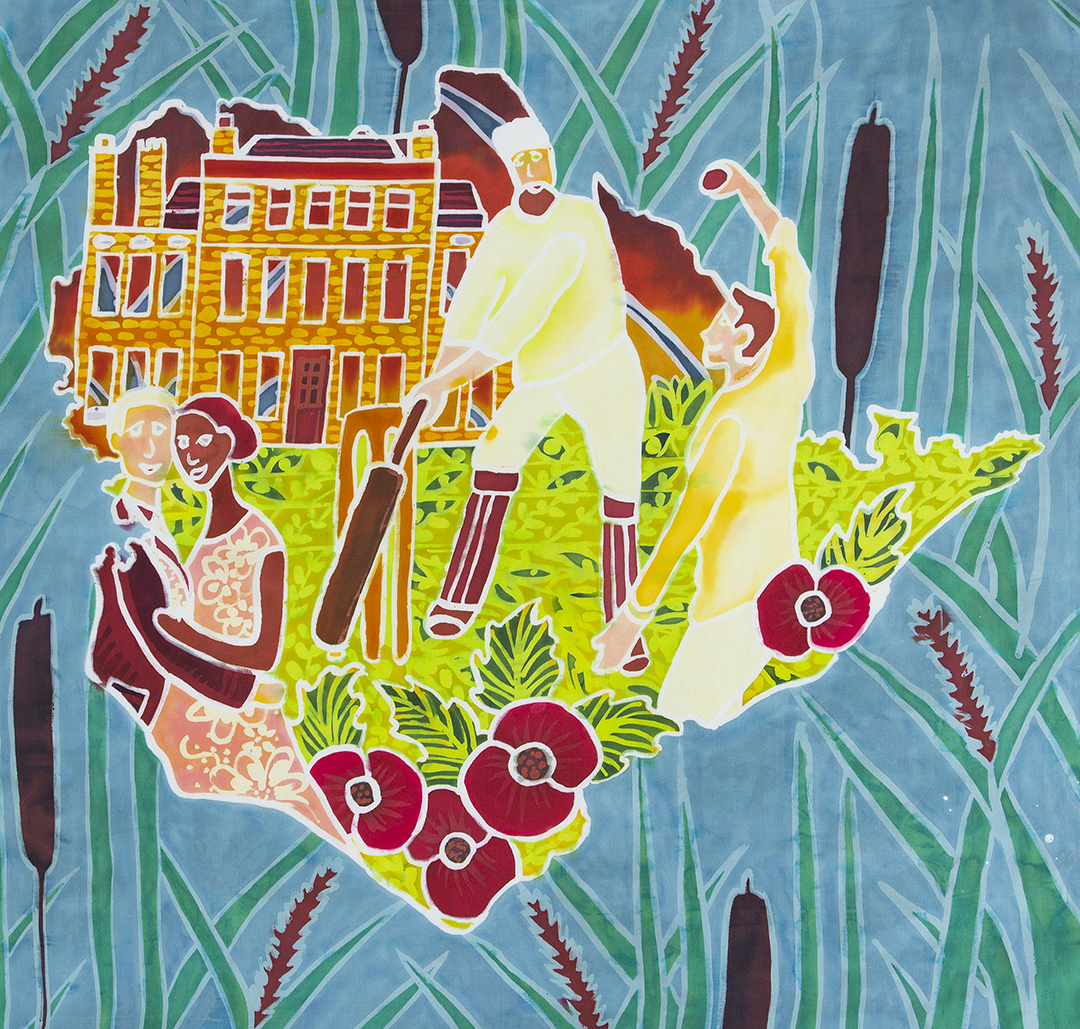 The HLF Conservation management action plan of 2012 contained much historical information about the Gardens, and so we have gathered together and presented that information in chronological order to make a timeline, in order to make a clear and engaging resource.

In 2017 Nigel Oxley asked a fantastic volunteer called Deborah Kirk to research and update the history of the site; this research was based entirely on original online source material, including reference to work by the historian and Humphrey Repton expert John Phibbs, bath house expert Dr Elizabeth Graham, conversations with Cyril Wolsten holme from the Hornchurch Cricket Club (Regarding Fielders Field), Julie Johns, & work with Simon Donoghue from the Local Studies Library and the Essex Records Office. The work has altered some assumptions we previously made about the park. Emma Moore, Registrar for Langtons House, created a full house history report based on Langtons, as a final assignment for a Module on House History for her Masters Study; her work is also referenced here.

Lisa Campbell Bannerman joined the project as an activity officer in June 2018 (on a five-year contract), and together with Deborah, they have combined all of this information with all the known existing images and facts they could find, to create the Langtons House and Gardens Timeline. It is a work in progress. We are always learning and adding to this timeline. If you have any historical information about the site and its local area, or images you would like to share with us, we are very keen to hear from you.

THE HISTORY OF FIELDERS SPORTS GROUND

Fielders Sports Ground is part of the Langtons Estate and dates from the eighteenth century when the village of Hornchurch was a sporting centre, with cock-fighting, prize fighting and an annual wrestling match for the prize of a boar’s head. Originally called Langton Park, it was the first official home of the Hornchurch Cricket Club. The earliest available reference to the Hornchurch team appeared in the Chelmsford Chronicle on 22 August 1783:

On Tuesday 26th instant a match of cricket will be played at Mrs Barkers at the Green Man Navestock between the Gentleman of Hornchurch and Ingatestone for one guinea each man. Wicket is to be pitched at ten o’clock.

The Langton Park ground was established two years after this match by Richard Barnard Wyatt, a former Eton pupil and keen sportsman who occupied Langtons House from 1785 until 1797, a time when cricket was becoming a major sport in England. The Hornchurch Club was representative of Essex as a county, and first-class games were played at Langton Park until 1793 when the repercussions of the Napoleonic Wars in Europe caused organised cricket to cease altogether. The ground was in use again by the early 1800s when Hornchurch experienced an era of outstanding success, witnessing a run of 7 years unbeaten from 1822-1829.

The club remained at Langton Park until 1889 when it relocated to the nearby Grey Towers Park, but when war broke out in 1914, Grey Towers was requisitioned for army billeting (the sportsman’s battalion). After the war the Hornchurch Cricket Club moved to a field near Wingletye Lane, and in 1925 it relocated again to a ground on the current site of the Queen’s Theatre, which was also used by the Britannic Lodge Cricket Club formed in 1918 by the fraternal Freemasons society The Hornchurch Loyal Britannic Lodge of Oddfellows. This group had links to a Quaker Community, who instigated a covenant to stop the consumption of alcohol on the Fielders field ground. In the mid-1920s the Britannic Lodge Cricket Club was offered a 21year lease on the former Langton Park site now owned by Jack Fielder, one of its founder members. Jack Fielder’s field became the new home ground of Britannic Lodge, one of the leading clubs in the area until the outbreak of the Second World War. (Then the lease was later renewed for another 21 years.)

In the mid-1940s the Hornchurch Cricket Club moved to Harrow Lodge Park to make way for urban development, and Britannic Lodge began to share its Fielders ground with the Air Raid Police, the Fire Service and the Local Government who used the grounds for mid-week games. By the 1970s the Lease had expired & the council had taken control of Fielders ground which by this time was also used by the Wingletye Tennis Club (which had been around since the 1920’s). In 1979 the wooden cricket pavilion was burnt down by vandals and Britannic Lodge was obliged to share the tennis pavilion which was already in a state of disrepair. The tennis club folded in the late 1980s, and it was not until 1996 that the sum of £110,000 was raised (from sources including national lottery grants, sports foundation for the arts grants, and donations from the club), that permitted the building of the present pavilion located on the eastern side of the Fielders ground.

In 2002 Britannic Lodge merged into the Hornchurch Cricket Club at Harrow Lodge Park, but the name ‘Britannic Lodge’ was still used by a Sunday only club for the next 5 years, and the Fielders Sports Ground was retained as a secondary site where cricket is still played today. The Season begins in the first week in May until mid- September, and games are most often played here on the weekend.

Things we don’t know yet:

http://find.galegroup.com/ttda/infomark.do?&source=gale&prodId=TTDA&userGroupName=havering&tabID=T003&docPage=article&searchType=AdvancedSearchForm&docId=CS67246316&type=multipage&contentSet=LTO&version=1.0 gives a detailed description of the grounds as they appear on the 1812 survey map of Hornchurch supplied by Simon Donoghue of Local Studies Romford. Humphry Repton began work as a landscape architect in the late 1780s when Richard Wyatt owned the estate.

[iv]Langtons gifted to the council from British History Online: https://www.british-history.ac.uk/vch/essex/vol7/pp25-31

by Essex Archaeological Society1906 from Archive.org: https://archive.org/details/transactionsess01socigoog/page/n123 and Laindon and District Community Archive:https://www.laindonhistory.org.uk/content/areas_and_places/langdon-hills/one-name-or-two-laindon-and-langdon-hills

[vi] The Tirrell and Latham families from The visitations of Essex by Hawley, 1552; Hervey, 1558; Cooke, 1570; Raven, 1612; and Owen and Lilly, 1634 Walter C Metcalfe from Archive.org: https://archive.org/stream/visitationsofess13metc#page/110/mode/2up/search/cade and Will of Thomas Latham from Elizabethan Life: Wills of Essex Gentry and Yeomen Essex County Council 1980 supplied by Simon Donoghue of Local Studies Romford.

[viii]The Peerage of Ireland by W. Owen, 1790 from: Google Books: https://books.google.co.uk/books?id=zjAwAAAAYAAJ&pg=RA1-PA371&lpg=RA1-PA371&dq=richard+gosfright+langton+hall+frances+peerage+of+ireland&source=bl&ots=EV6lJRXK3z&sig=ACfU3U3D5M2T5rTrq5qXi4l623Uwxv-qvQ&hl=en&sa=X&ved=2ahUKEwje0-Wvm4LhAhVQRhUIHeG1A-sQ6AEwAHoECAgQAQ#v=onepage&q=richard%20gosfright%20langton%20hall%20frances%20peerage%20of%20ireland&f=falseWills of Richard and Catherine Gosfright from Ancestry.co.uk

[x] Death of John Mackrill from The History of Essex: From the Earliest Period to the Present Time : Illustrated with Accurate Engravings of Churchs, Monuments

[xi] John Mayor of Langton from The Court and City Register Or Gentleman’s Complete Annual Kalendar: For the Year … 1776Jolliffe, 1776  https://books.google.co.uk/books?id=dvI9AAAAcAAJ&pg=RA1-PA24-IA13&lpg=RA1-PA24-IA13&dq=john+mayor+abingdon+langton+hornchurch&source=bl&ots=_olWlcQxEX&sig=ACfU3U1dpbXLBlp6SrNgMti7D_6v9lLKpw&hl=en&sa=X&ved=2ahUKEwiw-c3xnYLhAhVxsHEKHfWTDCQQ6AEwAnoECAAQAQ#v=onepage&q=john%20mayor%20abingdon%20langton%20hornchurch&f=false