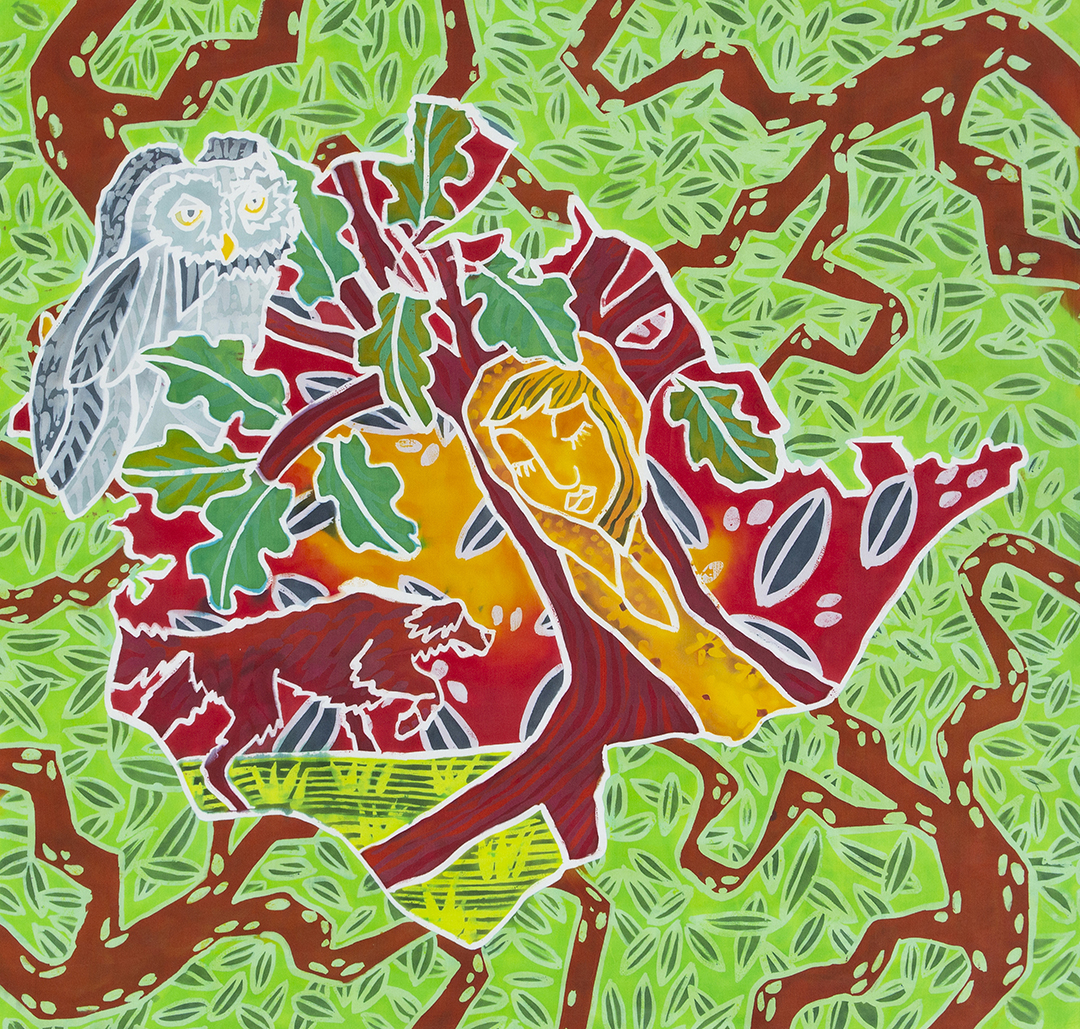 It was dawn. The woods were waking up, Robin giving his territorial song, its pure notes resounding through the trees. Blackbird gave its excitable trill of notes and in the background were the rustles and secret movements of the other animals. Badger shambling along, Fox nose to ground sniffing for prey, Rabbit having her early breakfast, scuttles for cover, white bob tail warning the others of Fox.  Suddenly, all the creatures still, there is something coming, something larger, even more menacing.  The warning cry goes out from Blackbird and Jackdaws lift as one and fly screaming alarm, alarm.

Here they come, the hunters, they are after anything they can kill, from Dormouse to Boar, they have a blood lust. Someone has put out word they have seen a poacher so these wild eyed men and wild eyed, nostril flaring, horses, flail through the wood with lop eared deer hounds heads up, listening, sniffing for human prey.

While the Lords Men thunder through the ancient wood, Freya lies still and cold in her hollow tree, her tree, known to her, all her life, sanctuary, tree smelling of wet moss, rotting wood, dripping with wood lice centipedes and shivering daddy long legs, nethertheless a safe haven for Freya. She clung to her dead rabbit, needing food for home she was the only provider, the family’s life line.

Poaching was punishable by death. After the horses she knew the hounds would come, they would find her, she must move.

Freya crept to the edge of her hollow oak and looked up. The oak had a twin, a huge bough. It bent down waiting to receive and hide the little one. Flinging her rabbit as far away as she could, Freya threw her rope out onto the welcoming limb of the oak and started to climb. The tree seemed to close protectively around her as she made her way up and up to safety, she became oak.

Ben, finally took a chance and poked his head out of Freya’s pocket, his little Polecat mind still indignant at the loss the rabbit he had helped secure, but knowing their lives depended on stillness, the pair looked at each other each understanding the need for silence.

Here they come, the dogs, their panting, growling, scrabbling selves, sniffing, digging. The oak interests them, they start to tear up the hollow trunk, then a dog rings out its howl of discovery and they all swiftly depart to tear apart Freya’s supper. Freya can breathe again; the pack abandon the tree.

Dusk, Tawny Owl unafraid of the crouching child in the tree gives its call, Badger comes out snuffling for food, in the remains of the rotten oak, his bear-like body rolls off into the brambles, Fox passes him but they ignore each other, each intent on his own foraging.

Freya freezes, there is an unfamiliar tread, it’s human. Adrenaline surges through her and Ben hunkers down deep into the sack he chitters, picking up her fear. The steps stop under her tree.

William Langdon Woodward parts the branches and peers up into the old oak, he gently beckons Freya into his arms, she sighs with relief, he was her friend and friend of the woods, she was safe. No words were spoken, he took her to the edge of the village. Before he leaves,he delves into his pocket and a rabbit is pushed into Freya’s hands.

Then he turns, the guardian of Langdon Hills returns to duty.