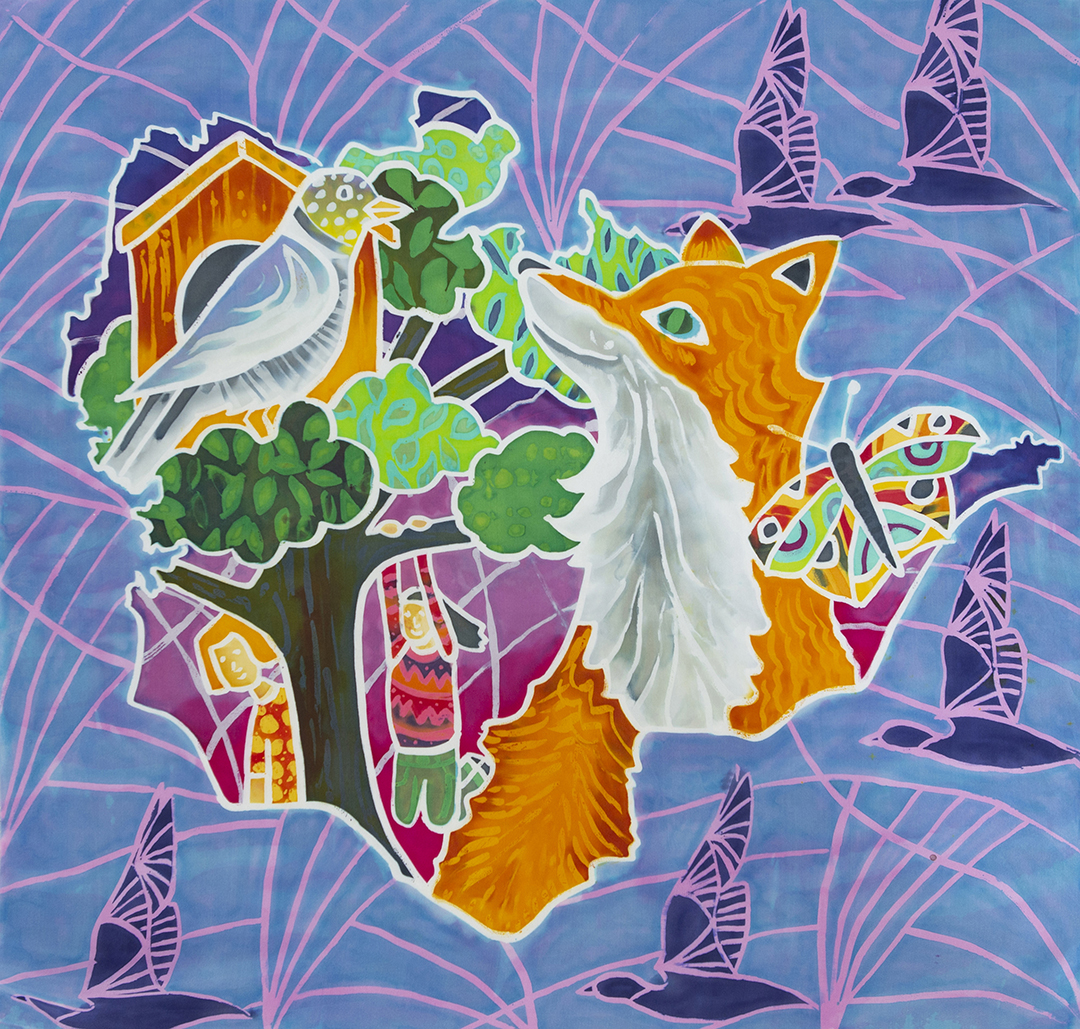 A little, traveller bird lands on a really old tree trunk early one morning. She is looking for a new home but doesn’t know if the garden is safe.

Laying on the lawn, enjoying the early morning sun is an old fox. The traveller bird knows that foxes like little birds for breakfast, so she doesn’t get too close.

The wily old fox sniffs the air and barks “Good morning. I have not smelt you here before.”

The traveller bird is nervous about replying but the fox is far away and so she replies “I have not been here before, I am searching for a new home. Is…..is this a nice place to live?” she asks nervously.

“A nice place to live? It’s the best.” Says the cunning fox, rolling about on the lawn, enjoying the sunshine.

“The best?” Enquires the traveller bird. “What makes it the best?”

The fox turns his head towards the bird slowly, “well on Tuesdays and Wednesdays there is a lovely young lady, who volunteers, and she sings us all lovely songs whilst she works away.”

“Ooh I love singing.” exclaims the bird. “I’m very hungry though, is there any food here?”

The fox slowly raises and wanders over to the path “Do you like juicy berries?” he says as he gets a little closer.

“Well the humans here, they plant trees with lots of berries on them, especially for us.”

“That’s nice of them. What’s over there?” says the bird, getting excited and moving closer to the fox.

“Oh, some very strong humans have built raised beds out of old tree trunks, so that they can grow even more food.

“Who eats all this food?” exclaims the bird, wide eyed.

“Well” says the fox getting closer still “the butterflies and caterpillars like the cabbage, and the squirrels like the hazelnuts, the greenfly like the fruit trees and …. the ladybirds like the greenfly,” grins the naughty fox

Now the bird looks a little uncomfortable and wants to change the subject “What do the humans eat?”

“Tasty cherries, red like blood, juicy mulberries, potatoes that the little humans dig up, giggling, and when it’s dark they light fires and cook tasty treats like marshmallows.”

“Ooh they sound nice, where do they do that?” asks the bird, distracted by the thought of soft gooey marshmallows.

“Come with me” says the clever old fox “and I will show you.” The fox trots down the path, into the woodland.

“There are 5000 snowdrops in this garden. I heard that a lady brought them here to be planted, and that she used to come here as a little girl.”

“Wow she must love this garden” Tweets the bird “I wish I could live here.”

The crafty fox looked at the bird and said “Well there are teams of little people, and they work very hard at the end of the day to build homes called bird boxes, I think you could move into one of those.”

“But aren’t they just for the birds that already live here?” Tweeted the worried little bird.

“Well, I have listened to the little humans, and they speak so many different languages, so maybe they too come from all over the world to make their home here…There are voices from Poland, America, Lithuania, Denmark and some mysterious place called Wales.”

“Then I don’t think they would mind if I stayed a while.” Tweeted the bird, who now was very close to the fox.

“No, I don’t think they would mind, they have even built something called a bird bath here.” The fox says as he nudges the bird up with his nose, “though most of us who live here use it more for drinking than bathing.”

“What do you eat?” Squeaks the bird, suddenly very nervous again.

The fox licks his lips mischievously and says “If you get really close to me you can see my milky eyes. I’m blind, but I can survive here because the humans leave me chicken, and chips, and if I’m lucky mayonnaise.”

“Oh wow” Tweets the bird “So even you, with your scary, sharp teeth, are welcome here. Where do you live?”

“In this hole, under the old Mulberry tree.” Says the fox, disappearing back to into bed for the day.

And next to his home the traveller bird spots an old trunk, with a carving of the old blind fox, and decides that maybe she should stay a while too.