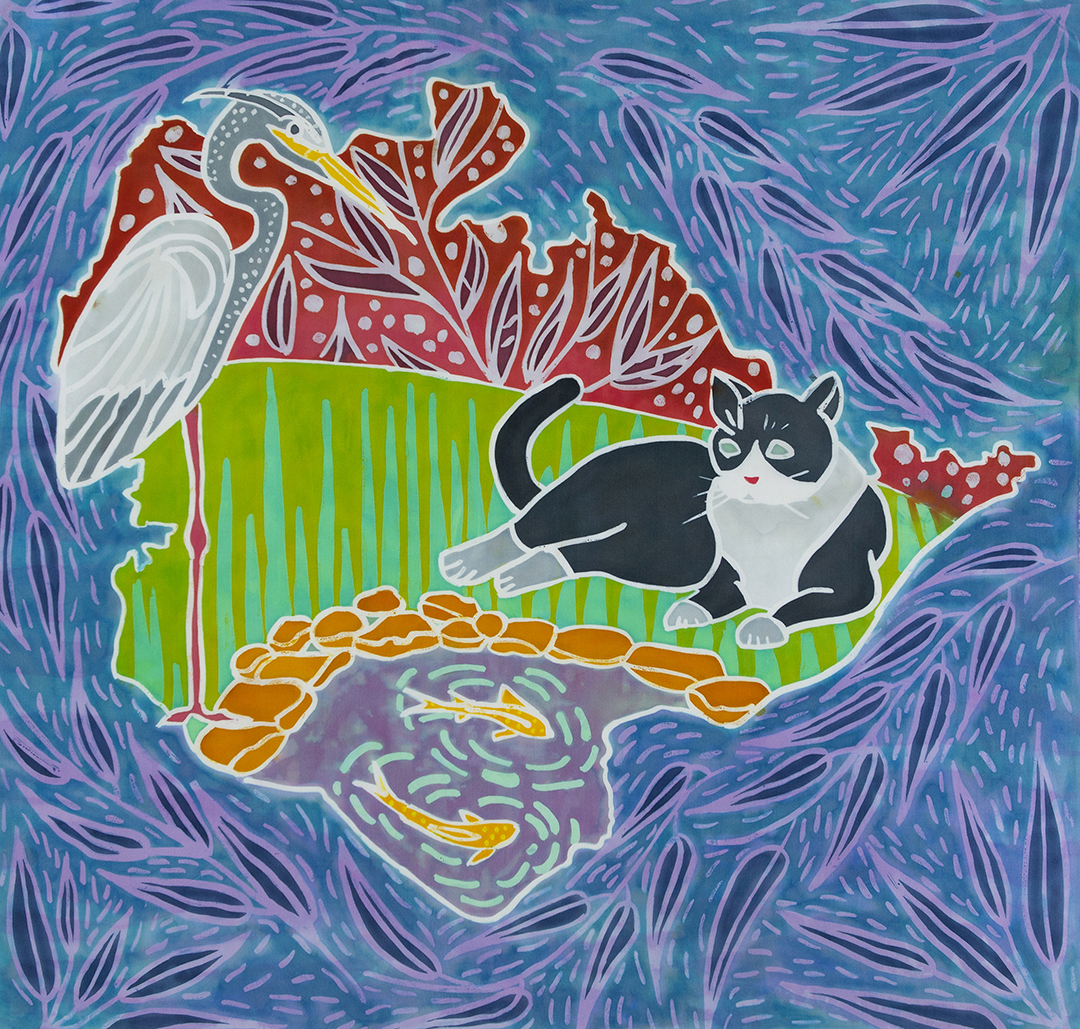 My name is Tom. I like my name now. It is a strong name. It was different once, but I don’t remember what it was. That was before I was left in this place to look after myself.

I found my new people when I was having a wander through the long grass: I was sniffing the flowery, sunny air when I peeped into their garden. I was scared at first when I saw them there, but they were kind to me. I let them feed me and give me a bed, and that’s when they named me ‘Tom’. It’s so much better than being a stray, and I can sleep through the day indoors if I want to, or do important things in the garden when the weather is ok. I don’t like to be outside if the rain comes. Getting wet is highly overrated if you ask me.

There are lots of trees here, and a big garden that I keep safe from marauders. I like to sit and look at the fish in the pond when I have a quiet moment, but the most annoying Rats come to drink there. Uninvited. They have no manners at all. If they won’t go away, then I bite them hard.

The Herons come sometimes to try to take the pond fish. They have beaks like swords, so I stay out of their way and don’t talk to them. The Ducks are fun when they come, but they keep away from me. I am not sure they would be too interesting to chat with as they only say ‘Quack’ about everything. Mind you, when the Big Pheasant comes into the garden, he just shouts. I think that is a bit rude of him, he is always in a hurry anyway, whatever he is doing.

At the bottom of the garden there is a big ditch called Mardyke and then after that is a big field. Sometimes in the Summer a big machine comes there and cuts the wheat. It is like a big shouty monster with big shiny eyes. I don’t go over there as I have my work to do in my garden. I keep the Squirrels away; they think they are cheeky and funny, but they are hooligans chattering away from the treetops, pretending they are Kings – and the Magpies, they always have too much to say, and too loudly. I watch them sometimes and think that one day I may catch one of them. The Foxes are a bit bossy here, and they think that they own my garden, but a quick slap on their heads from me usually tells them who is in charge round here.

A good trick that I absolutely love, is to climb up into the Apple tree and hide from my people. It’s great fun to jump out and scare them. Ha! Who said that Cats don’t like to laugh.

Did I tell you about the time I caught a big furry Mole? I took it home and let it loose in the house. It was so funny watching my people trying to get it to come out from behind the furniture. Of course, it wouldn’t let go with its great big pink hands. It took forever for them to get the daft thing out. Oh, that kept me laughing for ages.

The end of my Lane goes onto a big field. There are snakes there, I don’t like them. The ones with the patterns on their backs are sly, pretending they’re sunbathing, then creeping up on you while you are minding your own business, especially when you are chasing butterflies and dragonflies.

I quite like the Slow Worms, but they are all slink and not much else: one wriggle and they are gone on their way. Now, Lizards are good fun, especially when they leave their tails behind. I must admit that it was a bit of a shock the first time I saw that, but I still get confused by the Newts; they never leave their tails behind and they don’t stick around for long and always manage to hide so well.

You know, I have a little house of my own in the garden that I can hide in if I want to. Well, I did use it a lot until a big fat Toad moved in underneath it. Okay, he did keep the slimy slugs away, but I didn’t fancy sharing with a Toad. Mind you, he was a quiet neighbour, unlike the three big frogs that moved into the pond last Summer. Oh, they were so noisy that it sounded like something was dying in the garden. As for The Frogs Chorus, they never did sing in tune. So glad when they moved out.

I hate Fleas and Ticks; have you seen them? They hide in the long grass, and if you don’t watch out, they are on you before you know it, and they tickle and bite so much. It’s so annoying, when they keep talking in your ear when you are trying to sleep. I wish they would stay on their Hedgehogs and not jump onto me, then I wouldn’t need that stuff my people put on me to get rid of them. That stuff makes my eyes sting.

My world is full of interesting things, but I do have a lot of ‘looking after’ to do, speaking of which I must go now to look after my dinner.

Joanne Goddard was inspired to write her first book, Letters from Tom after writing this story for the Land of the Fanns 100 Stories project. The book follows life from adopted cat Tom’s perspective, detailing all the little things he gets up to.
You can get more details about the book via Tom’s Facebook page: Tom Jones The Cat: Letters From Tom or by emailing him at LettersfromTom@outlook.com.