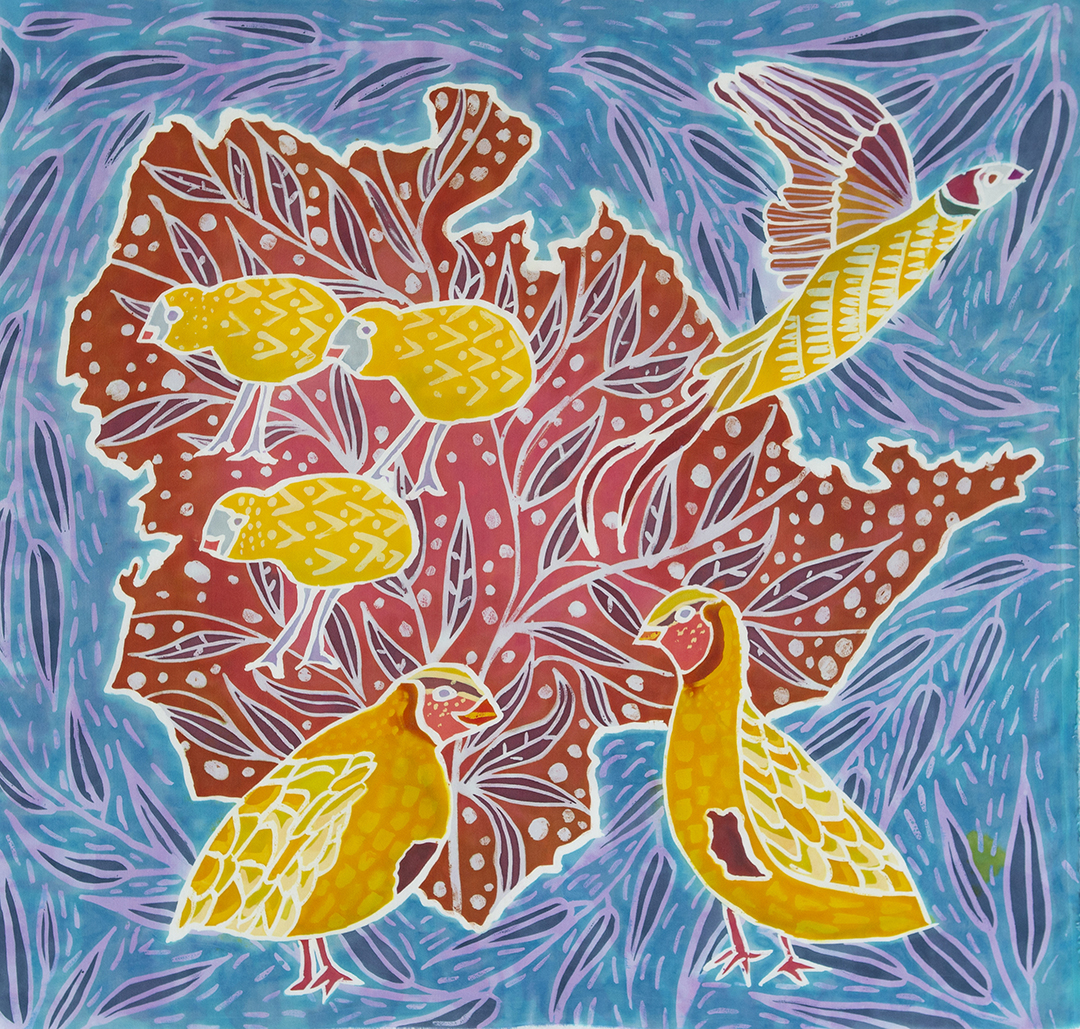 This story was going to be about The Bulphan Church Conservation Area but this has been changed somewhat as I have just returned from the funeral of Alan Revell who was the gamekeeper for The Orsett Estate for many years. Game keeping and conservation surprisingly do have a lot in common.

Gamekeepers know more about wildlife and the countryside than most people since they spend their whole lives within the countryside. Most Gamekeepers are employed by estates as Alan was. Alan was employed by The Orsett Estate. Obviously, there is a commercial side to this, it is a business and the business is trout fishing on the lake by the side of the A128 and shooting mainly partridges and some pheasants.

The shoot in Orsett buys in around 7000 partridge chicks and some 500 pheasant chicks. As Alan explained Orsett Fen is very flat so that pheasants flying overhead make an easy target whilst partridges are much faster and more difficult. Orsett is therefore a partridge shoot. If the land had deep valleys within it, then pheasants would be employed, because the shooters would stand in the valley with the birds flying overhead. Alan would bring in the young chicks and rear them in large cages about 1000 birds in each cage. They need care and attention because there are predators about. On one visit with Alan a sparrow hawk was in a cage. Alan said,” you go one way and I will go the other and we will catch it”.” By the way”, he said “sparrow hawks have talons like fishing hooks and if the they catch into your hand they are hard to remove”, fortunately Alan caught it and as it is protected let it go some way from the area. As Alan said,” I was wondering why some of the partridges were going”. When the birds are large enough Alan would kick the hinged boards about 300 millimetres high that acted like doors around the side of the cages and release about 50 from each cage each day.

Of the 500 pheasants most that are reared have the traditional distinctive colourings but also about 10 black ones are reared, the idea to let the beaters see where the pheasants are. Alan said,” they are very crafty those black ones any trouble and they race up to the copse hiding until the shoot is over”. Often during the breeding season, you will see a black pheasant strutting about.

Gamekeepers do have many types of traps. Rabbits were a scourge of The Estate at one stage and Alan arrived with a couple of metal traps as The Estate owners, The Cole family decided to have a purge on the rabbit population. Alan then arrived with a large bag of carrots which he threw around but nowhere near the traps,” let them get used to them”, he said. Over a period of a couple of weeks two rabbits were caught, Alan said that that was good for about half an acre, it seemed to me that there were hundreds of rabbits, but apparently not. Regrettably one poor rabbit was attacked by a fox which rendered it not suitable for eating. In his earlier career when times were hard Alan apparently used to tell his family that the meat was chicken, definitely not rabbit. Without rabbits on the estate there are fewer stoats and weasels, although the screams from a rabbit being attacked by a stoat is not one that I miss.

Farmers do not care for Magpies, they are seen as predators, eating other bird’s eggs and their young they are sometimes blamed for the overall decline in songbird numbers. They have become a very successful bird with its numbers increasing by 112% over the last 30 years whereas most other birds have been in decline. The trap used relies on the fact that magpies will try and rescue each other, the gamekeeper has a “Call bird” which is a live magpie. Gamekeepers do keep live, call birds and when short swap with each other. The trap which is quite large, contains the magpie and the top contains a hinged door. When another magpie comes to assist the trapped magpie, the idea is that it stands on the top of the cage and then falls through the hinged door into the cage. We had a cage by the outside of our hedge for many weeks, perhaps the magpies are quite smart because in spite of many magpies visiting the trapped bird none ever fell into the trap. Perhaps this is why they are so successful.

Unless you have a pristine lawn if you have moles its best to leave them alone Alan told me this just a few weeks ago. Mole traps are very dangerous in the wrong hands, they can either be black iron or galvanised. Alan swore that the moles could smell the galvanising and hung his traps out to rust. Even so moles have this uncanny habit of digging around the sides of traps. Moles have beautiful velvet like fur in the old days a gamekeeper cold get a pound or so for moleskin which were made into needle cushions. Really moles are only digging for worms and if you do wet an area of lawn excessively then you will attract worms and thus moles.

Other animals which a gamekeeper has to deal with are squirrels mainly because they get into roofs of houses causing damage, we found one dead in our water tank. I will ignore stories of squirrels as these stories could go on too long.

There is a funny story concerning mink or, American Mink, as they should be rightly called, these were set free by animal rights activists in the sixties and are causing devastation within the Suffolk and now Essex countryside. The wildlife trusts in these areas have a programme of eradication as mink wipe out water vole colonies, small birds and eggs, they will empty a lake of fish very quickly. Many wardens do not realise they have a mink problem until approached by The Wildlife Trust enquiring how fish stocks are. Low fish stocks can be as a result of mink.

There used to be water voles alongside The Mardykes in both Parkers Farm and Conway’s Road cute little creatures and you could see their holes in the sides of the banks of The Mardyke. Mink will go into a hole and kill every water vole.

One day in a very large pond by the side of our house my son remarked that all the fish were jumping out of the water. On further inspection there was a long black creature about 400 millimetres long swimming vast distances over 10 metres under water and chasing all the fish. This creature we finally discovered was a female mink, the male is 500 millimetres long.

We looked up and contacted The Wildlife Trust based in Suffolk and they agreed to visit and bring a raft . You are not allowed to keep a live mink in this country and the idea of the raft is to first identify that it is a Mink. The raft contains a clay floor area and the mink which is an inquisitive creature walks through a tunnel over the clay area and by its footprints you can confirm it is a Mink.  The Wildlife Trust gives out brochures with different type of footprints. You can then turn the raft into a trap and because you cannot keep a live mink, you have to dispose of it humanely somehow. I spoke to our farmer neighbour John Wordley who also has a large pond well stocked and explained the situation. John asked when did the mink arrived I told him 9.00am in the morning. John said ring me when he comes, I said on Sundays I go to Church for 9.15am so to come even if I am not there.

The mink came on Sunday morning at 9.00 am as did John Wordley with his shotgun. We have a bathroom window at first floor level overlooking the pond. John opened the window and within minutes had shot the mink. My son’s girlfriend was staying at that time and cried out there is a man in the bathroom with a shotgun. My son casually replied,”don’t worry it happens all the time here”.

What can we say about Gamekeepers and conservation? A person who comes out to shoot during the season can pay £800 a day for the privilege, they are allowed to shoot a maximum number of birds. Alan often said most of the people who came would never be able to shoot the allotted number. For most it’s a day out, when they arrive either on a Wednesday or Saturday it is very impressive seeing the procession of mainly high-end Land Rovers and of course many have a dog.

The money is used by The Estate to keep it in good order and it can be seen that The Orsett Estate is kept to a high standard. Just this year The Estate has set aside and maintained a 5 metre wide strip around its boundaries for wild flowers and wildlife.

Coming from East London the notion that someone would pay so much money to spend a day killing birds is something that has taken me a long time to get. It is a country way of life and if you find it difficult do not live in the country especially in an area where there is an established shoot.

When we first moved here over 30 years ago, seeing a huge number of people coming towards our house from the surrounding farmland all waving blue sheets of plastic, we thought we were being attacked, these turned out to be the beaters who get the birds up to fly in the direction of the guns. In those days we used to go out on shoot days, it seems that the beaters who are volunteers get a free shoot day on the last day of the season. That’s assuming of course that you consider that as a reward.

The Queen and The Royal Family shoot and apparently The Queen was upset this year that Grouse shooting was cancelled at Balmoral due to a lack of birds.

Climate change has not been mentioned and we can see at first-hand how the traditional seasons have changed and we now have very wet frost-free winters and extremely dry summers. This affects the wildlife with ponds drying up we have less mallards, without fish in the ponds you do not see herons circling overhead. It is very much a circle of life and wildlife will adapt some will survive and some will not – survival of the fittest. Orsett seems to have its own climate, in May there was 25 millilitres of rainfall in Brentwood but only 5 millilitres in The Orsett.

On the morning of Alan’s funeral a pair of pheasants came into the garden with their three young which we had seen earlier as chicks and wondered if they would make it, now they were quite large, also on the same day the moorhen on the dry up pond introduced her three chicks like three small lumps of coal. Perhaps just to let us know that life was carrying on pretty much as usual.