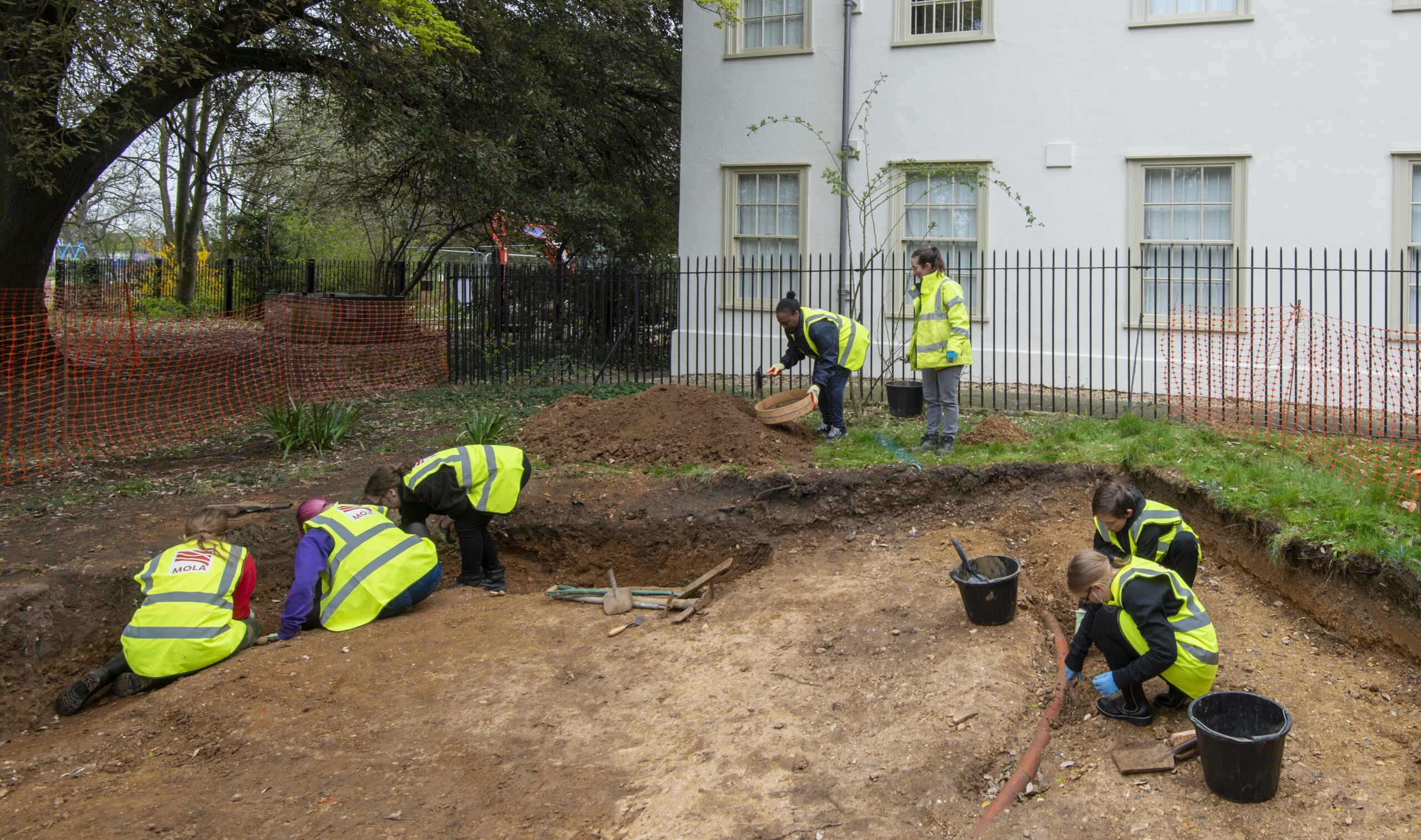 At the beginning of April, as part of the Land of the Fanns Community Archaeology Project, Museum of London Archaeology (MOLA) worked with the Young Carers on an exciting project at Valence House in Dagenham. The project was to explore the archaeology of the site and demonstrate to young people what archaeology is and how it helps us understand the past. 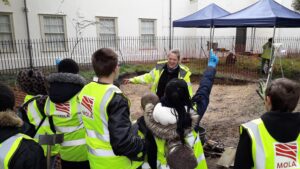 As part of a three-day project, children and young people aged between 9 – 21 from the Young Carers of Barking and Dagenham, working with MOLA archaeologists, excavated a trench at Valence House, aided by local community volunteers.

Once earth was removed, a late 19th or early 20th century ceramic drain was uncovered. This may have been put in by the May family to bring water into the basement washrooms, or during early 20th century redevelopment works at Valence House. The young community volunteers particularly enjoyed excavating this feature and removed three sections to see if the drain contained any artefacts. A section of the drain now features in Valence House’s Young Carers’ Dig Museum, currently on display in the Valence House tearoom.

A robber trench was also recorded, which had removed much of an earlier brick foundation. Stone or other building materials from a building is sometimes reused and a trench left by this removal is backfilled by the laborers who have “robbed” out a wall either completely or of its facing stone. The trenches where the walls once stood and where the stone has been removed are called robber trenches or ghost walls. Archaeologists should be able to reconstruct a plan of the original structure from careful examination and recording of the robber trenches.

A small part of the wall remained, and it may have been part of a small one-story building or an external wall. It is possible that it is part of the ornamental walled gardens discovered in earlier research. As with the drain, the young volunteers were responsible for excavating this wall and assisting with its recording. Both the drain and the robber trench cut into earlier clay and gravel layers, that possibly represent the driveway to the house, and which can be seen on earlier OS maps.

Keen to dig, the volunteers also assisted with further excavation to look at the stratigraphy or layers of earth and rock at the site. Later excavation by MOLA archaeologists revealed that underlying the clay and gravel, there were earlier surfaces which may relate to construction phases of Valence House. Pottery was found here that dated from 1480 to 1650. 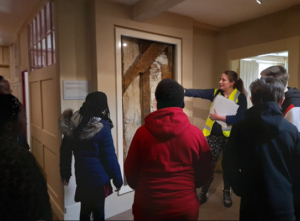 Volunteers learned a range of archaeology skills including sifting spoil from the dig and washing finds, metal detecting, artefact curation and interpretation, pottery making, and explored the Valence House Museum and its archaeological galleries. MOLA specialists worked with the volunteers to record the site, giving all the volunteers a much broader introduction to archaeological disciplines beyond field excavation.

To conclude the dig, a free open day was held on Saturday 9th April, attended by over 200 visitors from the wider community. In addition to activities organised by Valence House, visitors were able to see the community dig site, speak with MOLA staff about the archaeology of Valence House, see the finds that had been uncovered and curated by the young volunteers, and uncover and handle finds from MOLA’s simulated dig boxes. 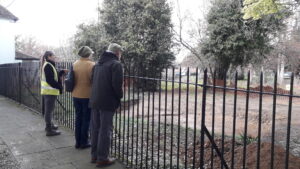