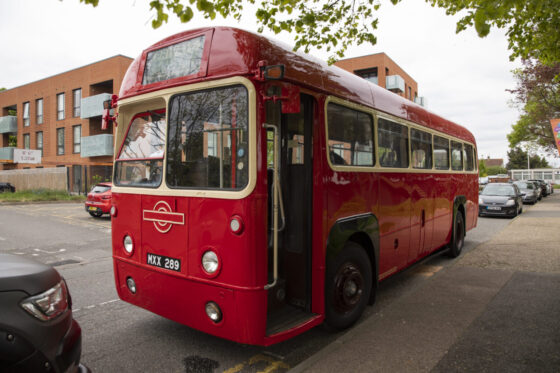 This is only the third vintage bus tour of heritage sites that Land of the Fanns have been involved with, this time to visit a number of sites in Havering which are all part of the DiscoverME network. DiscoverME, which stands for Discover Metropolitan Essex is a joint initiative between various partner organisations which helps to showcase some of the amazing heritage sites in the local area including local museums and historic buildings.

On Saturday 9 July, the tour started at 10am from the Thames Chase Forest Centre in Upminster. Participants were treated to a tour of the 17th century Essex Barn, led by Mary Wright, co-chair of Thames Chase Trust. The barn is one of the best preserved in the London area and is surrounded by a stunning landscape at Broadfields. 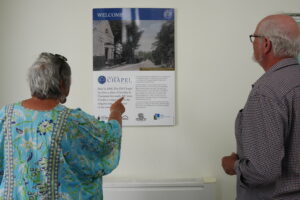 We were taken by a 1950’s RF red single decker bus, from the London Bus Company, to the next destination, The Old Chapel in Upminster. The Chapel was originally built in 1800 as a Protestant Dissenters Chapel. In 2012, the building was fully restored and now offers open days on set weekends. It is also available as a hire venue and for school visits. The tour was led by two of the volunteers from the Friends of the Old Chapel, Roxanne and Keith,who gave a presentation on the history of the Chapel.

Across St Mary’s Lane we visited Upminster Windmill, operated by the Friends of Upminster Windmill. This type of windmill is known as a smock mill, so named after the garment worn by country folk. The Mill was built by a farmer, James Nokes, in 1803, and continued to be worked until 1934. Theres’s lots of great information about the Mill including some interactive 3D images, the story of the restoration and information on wind speeds and direction on their website. Two of the Friends group, Paul and Dennis gave a tour of the site, including the fantastic garden, and introduced some of the new display technology in the visitor centre. They are hoping the Mill will be fully open for visits starting next year. 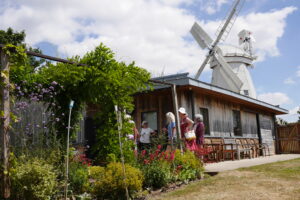 The lunch stop was in Romford, combined with a trip to the Havering Museum. Housed in the buildings of the old Romford Brewery there are unsurprisingly a number of exhibits on brewing. Our tour guide, local volunteer Dennis was a mine of information on local history and there was a small pop up café at the back. More information on Havering Museum can be found on their website. The Museum hosts many temporary exhibitions so it’s always worth keeping up with what’s on there. 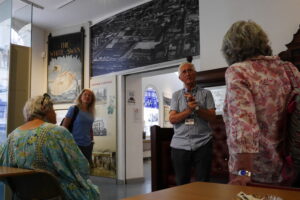 The last stop on route back to Upminster was the Tithe Barn Museum of Nostalgia. It’s hard to describe the contents of the Barn, which is packed full of 14,500 artefacts from the last hundred years or so with everything from mobile phones through the ages to machines to cure all ailments, boats and historic farm implements. It really is an Aladdin’s cave, all housed within the Tithe Barn. The impressive barn, which stands at 45m long, was built by the Abbey of Waltham in 1450. Ian Whaley who volunteers for the museum was on hand to give us an introduction to the Barn and the exhibits.

For more information on visiting any of these sites, please visit the DiscoverME website.