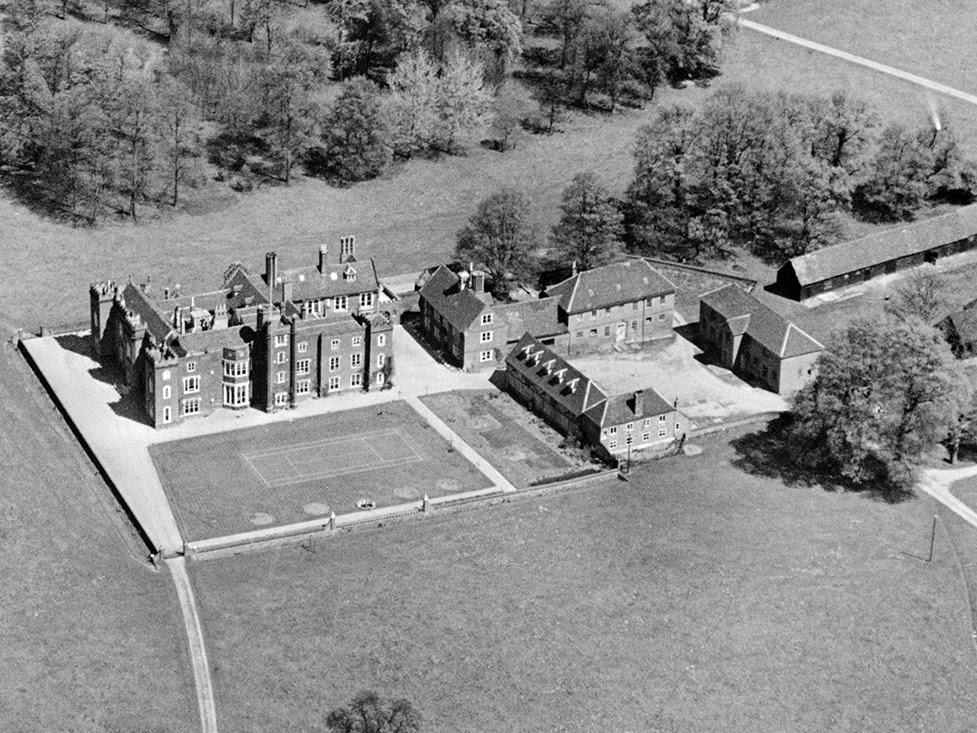 More than 300 aerial photographs dating from 1929 to the present day were studied as part of the investigative analysis.

Together with research published in July 2021, which confirmed that the remains of Tudor and Jacobean gardens had been discovered at Belhus Park, this aerial photography provides an invaluable resource for the restoration and improved management of Belhus Park and its future removal from the Heritage at Risk Register.

A number of photographs taken over a short period of time show rapid changes and developments to a military camp based at Belhus Park, from the latter stages of the Second World War through to the post-war era.

During this time, the park was affected by bomb damage, with a number of bomb craters visible on aerial photographs within and surrounding Belhus Park, but whether any landed on the house itself is less clear. No obvious damage to the roof could be seen on the 1944 photographs or later before its demolition.

The earliest vertical photographs of Belhus Park were taken by the Royal Air Force in April and July 1944, around the time of the D-Day landings (6 June 1944) and a year before the end of the Second World War. 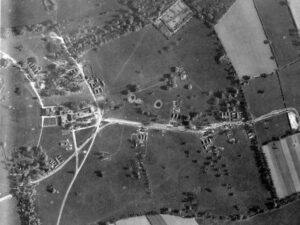 The photographs taken in April 1944 clearly show a military camp located on the Belhus parkland, with troops preparing for the D-Day invasion. Known as Marshalling Area S, the Park was temporarily home to part of follow-up force ‘L’ which landed on the British beaches in Normandy in the days after D-Day. They included members of the 51st (Highland) Division who embarked from ports such as Tilbury in the Thames Estuary, reaching Normandy from 7 June 1944.

In the photographs, tents and temporary buildings can be seen throughout the park. The headquarters of the camp would have been based in Belhus House with soldiers’ accommodation consisting of more than 300 small circular bell tents, many concealed from aerial view by the canopies of parkland trees.

The photographs also show small hubs of tents and buildings which may have been used for washing and food facilities or possibly sergeants’ quarters. A football pitch and another smaller sports pitch can be clearly seen to the north of the parkland.

The east-west path connecting Belhus House to the edge of the parkland (visible on the first edition Ordnance Survey map of 1897) looks to have been mostly hardened and upgraded, possibly to support the volume of military vehicles travelling across the park. It is not known if the park was used as a training camp before 1944 or how long some of the troops had already been stationed there. 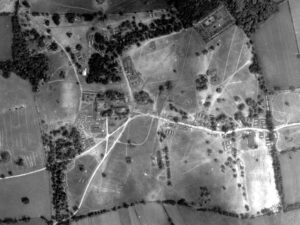 In images taken of Belhus Park in July 1944, many of the small bell tents have gone but others have been erected, along with some new buildings and oblong tents. There appears to be a greater number of vehicles on the parkland and some new small ditches located near to the tents, which could be weapons pits. 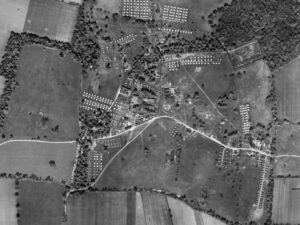 The layout of military activity has completely changed by May 1946. Gone are the small and oblong tents, replaced by a large camp layout with regimented rows of tents grouped and spread throughout the parkland. Rectangular ground parchmarks seen on the photographs suggest that more than 400 tents had been erected in the park at one time. More than 90 of those tents were still in position when this photograph was taken. New buildings can also be seen to the east and south of Belhus House.

The purpose of this post-war camp is not known. It could have been used to house soldiers awaiting demobilisation, or as a displaced persons’ camp or even a Prisoner of War camp.

The removal of military buildings was not completed until well after the end of the war. Buildings remained in the park in 1955, although they had all gone by 1961. The concrete road constructed during the war had largely been built over, with only two small sections visible on photographs, along with three buildings seen on aerial photographs taken in 2015.

Other historic Belhus Park features seen clearly on the aerial photographs include a curving linear ditch, possibly forming an enclosure, and pits, which have tentatively been dated to the Iron Age or Roman period; the remnants of an 18th century landscape tree avenue which extended west of the walled garden; and the clear foundational remains of the country house alongside some of its outbuildings.

Historic aerial photographs offer a stunning snapshot of almost 100 years of life on the Belhus Park estate, but they don’t give us all the answers.

We’d like to learn more about the military personnel who were stationed at Belhus Park, what military activity was taking place between August 1944 and May 1946, and the extent of the bomb damage to the park and house.

We’d love you to help us unlock some of those secrets by becoming an Enriching the List contributor and sharing your photos, information, memories and film clips (You Tube account needed) to the list entry for Belhus Park. Find out how to enrich the list here: https://historicengland.org.uk/listing/enrich-the-list/

Our partners at Land of the Fanns would welcome any digital contributions you’d like to offer and would love to hear from people who have memories of the Belhus Park estate, for their ongoing oral history project. Please contact landofthefanns@thamechase.org.uk

Christopher Laine, Landscape Architect for Historic England, said: “This analysis of almost 100 years’ worth of aerial photographs held within Historic England’s archives has enabled a better understanding of the physical changes across Belhus Park in the 20th and early 21st centuries. It is helping to fill in gaps in our knowledge, enabling further discussions about how to conserve and sustainably manage this important historic landscape into the future. We hope that by publishing the findings of our work, other people will be inspired to share and make available their photos, videos and memories of Belhus Park.”

Amanda Dickson, Aerial Investigation and Mapping Investigator, said: “It’s been fascinating to see the development of the Second World War military camp at Belhus, on the historical RAF photographs, and wonder about the many lives and stories of the military personnel based there during the war. I am particularly curious to know about those people who were living and operating within Belhus Park just before an RAF aeroplane flew over and took the photograph on 1 May 1946. I’m looking forward to members of the public sharing their own stories and hopefully providing that information.”

Benjamin Sanderson, Land of the Fanns Scheme Manager, said: “This project has revealed one of the many hidden gems of the Land of the Fanns landscape. The aerial photography training being led by Historic England will be a great opportunity to take part in the project and learn new skills. I really hope people enjoy it.”

Following research published in July 2021, which confirmed that the remains of Tudor and Jacobean gardens had been discovered at Belhus Park, the aim of the aerial photographic analysis was to provide further archaeological understanding of the Park, particularly during the Second World War.

This additional information will provide a base for future detailed research by volunteers working on the ‘Designed Landscapes’ project, run by Land of the Fanns in partnership with the Essex Gardens Trust.

The assessment of land use in the 20th century provides an invaluable resource for the restoration and improved management of Belhus Park and its future removal from the Heritage at Risk Register.

Historic England is working in partnership with Impulse Leisure, Thurrock Council, The Woodland Trust, Essex County Council, the Thames Chase Trust and other partners to ensure the conservation of this important historic setting and work towards the creation of a Conservation Management Plan for the wider Belhus Park estate.

Belhus Park contains the remains of a mid-18th century park designed by Lancelot ‘Capability’ Brown and Richard Woods. Together, they transformed the formal Tudor gardens and the park of the much earlier Manor of Belhus.

The manor was lived in from the 14th century and passed through marriage to the Barrett family who rebuilt Belhus House towards the end of the 16th century. By the mid-17th century they had built up one of the largest estates in Essex. Following a period of neglect, the house and grounds were updated by Lord Dacre between 1744 and 1777, with Lancelot ‘Capability’ Brown commissioned to remodel the grounds between 1753 and 1763.

During the Second World War, Belhus was damaged by bombing and military occupation, leading to the house being demolished in 1957.