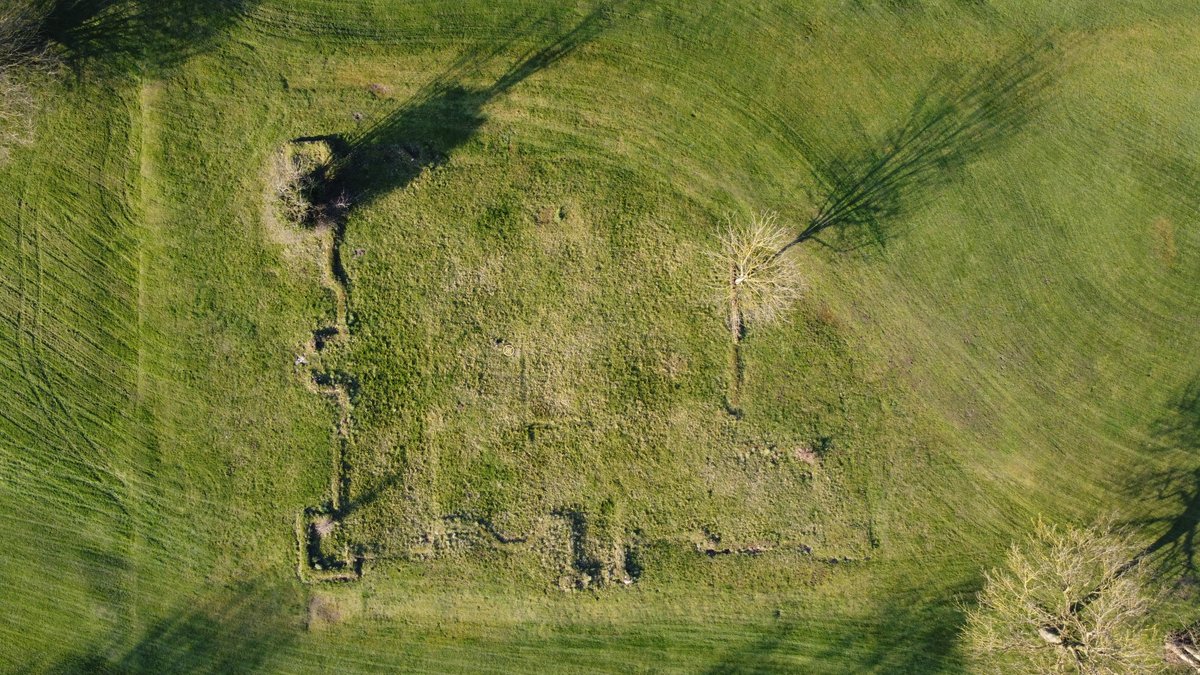 Volunteer researchers find evidence of surviving features in the landscape

The Land of the Fanns are delighted to be able to reveal exciting developments in our Designed Landscape project with the discovery at Belhus Park in Thurrock of the remains of Tudor and Jacobean gardens. We are working with Historic England who have conducted the research at the site, to protect and examine the remains.

Belhus Park contains the remains of a mid-18th century park designed by Lancelot ‘Capability’ Brown and Richard Woods. Together, they transformed the formal Tudor gardens and the park of the much earlier Manor of Belhus.

The manor was lived in from the 14th century and passed through marriage to the Barrett family who rebuilt Belhus House towards the end of the 16th century. By the mid-17th century they had built up one of the largest estates in Essex. Following a period of neglect, the house and grounds were updated by Lord Dacre between 1744 and 1777, with Lancelot Brown commissioned to remodel the grounds between 1753 and 1763.

During the Second World War, Belhus was damaged by bombing and military occupation, leading to the house being demolished in 1957. Today the Belhus Park Golf Course occupies part of the Belhus Park estate.

Initial research undertaken by volunteers as part of our Designed Landscapes project suggested that remains of Tudor and Jacobean formal gardens lay beneath the surface of the Golf Course,

The volunteer researchers discovered, in aerial photographs and remote sensing data, features that appeared to mirror a 1619 pictorial survey of Belhus Park and a late 17th to early 18th century painting depicting a bird’s eye view of the property. This evidence suggested that the layout of the former gardens had survived.

Our Designed Landscapes project was run in partnership with The Gardens Trust and was funded by the National Lottery Heritage Fund. With the support of golf course operators, Impulse Leisure, Land of the Fanns asked Historic England to carry out detailed on-site research, which confirmed significant parts of the original garden design beneath the golf course fairways.

The survival of a circular water feature to the west of the former manor house, and the patterns of paths and walls verifies the view of the gardens shown in the late 17th to early 18th century painting.

The fieldwork carried out by Historic England’s Archaeological Survey & Investigation and Geophysics teams used non-invasive methods that allowed detailed analysis of the subtle earthworks and shallow buried archaeology without the need for excavation, ensuring their preservation in situ.

These are very exciting developments for all the partners involved:
Christopher Laine, Landscape Architect for Historic England said: “We already knew that Belhus Park was a special place, and a designed landscape of great historic interest. This research proves the survival of these rare formal gardens just underneath the surface of the golf course and improves our knowledge of how the gardens and landscape at Belhus Park developed. It will help to inform strategies for improving management and conserving this important heritage for current and future generations.”

Neil Linford, Senior Geophysicist for Historic England said: “It was a great pleasure to be able to get back out to conduct the field work at Belhus after lockdown and we were very grateful for the help and interest from all the staff at Impulse Leisure. We were very excited when we started to see the image of the Tudor water garden appear on the laptop screen as we were collecting the data – that made all the hard work very worthwhile!”

Benjamin Sanderson, Land of the Fanns Scheme Manager said: “It’s great to see the efforts of local volunteers recognised in this important piece of work to record and protect such a valuable piece of local heritage. The findings have been a real boost for interest in the site, with a diversity of partners now committed to planning for its future.”

Phil Lobley, Land of the Fanns volunteer said: “Having spotted the hint of a circular Belhus Park garden feature on satellite images and a site visit, it was very satisfying to discover that the subsequent field work undertaken by Historic England has produced stunning results, confirming my earlier research.”

Karl Hayes, Managing Director of Impulse Leisure said: “Impulse Leisure are delighted to be working in partnership with such an enthusiastic group of volunteers and professionals to explore, understand and retain such a historical finding at Belhus Park.”

Historic England’s research provides a valuable foundation to assist the creation of a Conservation Management Plan for the wider Belhus Park estate. Such a plan will enable better collaboration between landowners and operators to protect and raise awareness about the significance of this important historic landscape.

Historic England will be working in partnership with Impulse Leisure, Thurrock Council, The Woodland Trust, Essex County Council, Thames Chase Trust and other partners to ensure the conservation of this important historic setting and work towards the removal of Belhus Park from Historic England’s Heritage at Risk Register.

The historic garden features lie within a part of the live golf course where there is no public access, and many of the remains cannot be seen easily from the ground. It is hoped that there will be future opportunities for community engagement, volunteering, exploring and enjoying this fascinating place.
Information about the historic landscape of Belhus Park can be found at the Capability Brown Clubhouse at the Belhus Park Golf Course.