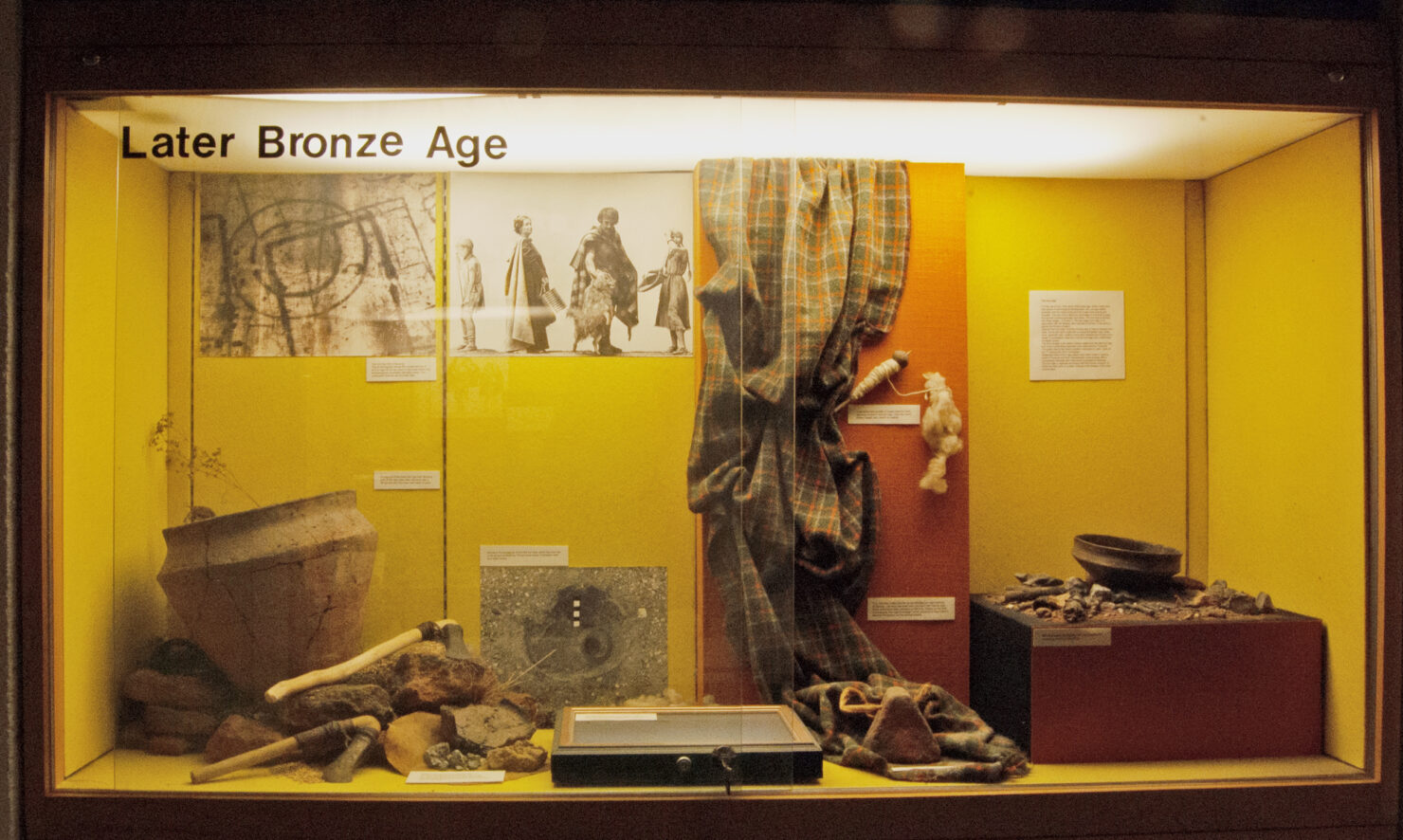 Thurrock Museum is benefiting from the attention of archaeological and objects conservator, Hazel Gardiner, thanks to Land of the Fanns support. Read her report here:

Tucked away inside the Thameside complex at Grays, Thurrock Museum is a treasure house of archaeological and social history artefacts from the area. It has a wonderfully informative and comprehensive series of displays, thoughtfully and imaginatively put together in the early 1970s, with only a few alterations since. The museum remains a much-loved local attraction to this day. However, after fifty years, the displays are in urgent need of conservation attention and some sympathetic updating. This has been difficult to schedule until recently as the museum is normally open every day. Museum Officer, Valina Bowman-Burns, decided to make the most of the current closure by taking the opportunity to refresh the displays. With support from the Land of the Fanns Community Action Fund, the first steps in this process have now been made. I was delighted to be asked to work with Valina on this project.

Beginning with the displays that are most in need of cleaning and conservation intervention, I am in the process of assessing the case materials and recording the condition of each object. After such a long time on exhibition, it is likely that at least some objects will be in need of remedial work. Most case interiors have a visible dust layer and there are clear signs that insect pests have been at work in the past. Happily, this insect damage is usually minimal.

The first display case I assessed, which focuses on the Later Bronze Age, holds a group of metal and ceramic objects arranged with props: non-museum objects intended to add atmosphere and a sense of authenticity to displays (header image). In this display case props included chicken bones (not fully cleaned), a taxidermy mouse, dried grasses, grains of wheat, and leaves. (figs. 1 and 2) Not surprisingly, as a number of these additions are nutritious snacks to some insect larvae, there was evidence of pest damage. Most of the museum objects, being inorganic, were not affected.  Sadly, however, along with the wool felt case lining and some of the props, a piece of beautiful hand-woven plaid textile had proved irresistible to the pests known as woolly bears (carpet beetle larvae), that had managed to penetrate this display case. (fig. 3) The textile had numerous holes.

Loose surface dust was removed from objects using a soft brush and the vacuum cleaner. Smoke Sponge, a conservation material ideal for removing fine particulate dirt, was also used as required. All extraneous prop material that could potentially harbour pests was removed. (fig. 5) Although no active pest presence was detected, the plaid was frozen as a safeguard and will be cleaned at a later stage. Freezing organic material at minus 20 degrees for two weeks will kill any residual pests and their eggs.

In this display case the metal objects were generally stable, but the adhesive used in the reconstruction of the ceramic vessels has contracted over time, leading to a gradual weakening of the bonds holding the vessels together. This is particularly noticeable on one large vessel. Before too long this vessel should ideally be dismantled and rebonded to ensure its ongoing life. (fig. 6)

The display case just described provides a good example of the sort of issues that are likely to be found throughout the museum. In some other display cases, objects have been adhered directly to the wool felt case lining, and there are a number of unusual materials used as supports that would not now be considered suitable.  These include: plasticine, wax, Blu Tack, Velcro, and in one case a section of what appears to be plumbers’ PVC piping providing, with plasticine reinforcements, an internal support for a fragile Roman ceramic vessel. The use of wool felt as the primary lining material in most display cases may also need to be addressed at some point. When the museum display was put together, there was less access to conservation support than at present, so it is not surprising that unsuitable materials and questionable display methods were used, and no blame should be attached to this. In most cases such materials and methods have not harmed objects, although they would not be considered today.

The role of any conservator is not only to assess and treat objects, but also to consider all aspects of the museum environment, from the building envelope to the display cases and the materials used within them. As progress is made through the museum, information will be gathered with a view to providing advice on best practice in order to prevent or mitigate agents of deterioration and their effects. Therefore, as well as carrying out assessment, case and object cleaning and providing treatment recommendations, I aim to support my museum colleagues in their development of an effective preventive conservation strategy for the collection.