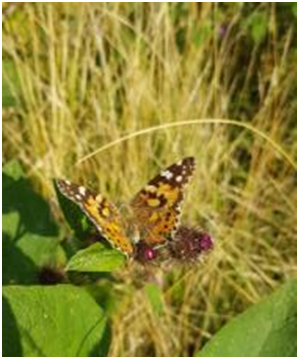 It’s been another busy summer for the Land of the Fanns project with the team and partners engaged in delivery of training, events and the development and delivery of projects across the landscape. Here’s a round-up of highlights from the last six months.

The Land of the Fanns team had a real focus on training during April – June with 69 people attending nine training courses. Training highlights included willow weaving with London Borough of Havering as part of their National Lottery Heritage funded project at Langton’s house and Garden; leading water way clean-ups led by Thames21; Riverfly training with the Zoological Society of London as part of the Riverfly Monitoring Initiative; Dragonfly identification with London Wildlife Trust as part of their Water for Wildlife Project; Bumblebee identification led by the Bumblebee Conservation Trust and another one of our successful outfall safaris along the River Rom Lead by Zoological Society of London.

We worked with local volunteer Patti Plestead to deliver four training sessions over the course of May, June, August and September in how to record oral histories. Three people attended the training who will now comprise a core group able to use recording equipment to go out into the community to record oral histories. These records will be kept locally at Thames Chase but will be available for interpretation projects or research also available via the British Library.

Coming up in September/November this year we will be delivering a series of training workshops around Designed Landscapes with the support of The Gardens Trust as part of the Land of the Fanns ‘Know it, Love it’ project. The project aims to equip people with an understanding of what designed landscapes are, the history and features they contain together with an understanding of how to access and explore the archives held at local records offices. The training is designed to be practical and delivered in a fun and engaging way at locations including Stubbers, Dagnam park, Thorndon Country Park and Warley Place.

In July we held our built heritage training course with Museum of London Archaeology. The 8-day course was attended by seven students as part of the Thurrock Prince’s Trust Scheme. The course focused on All Saints Church at Horndon on the Hill. Through a mix of classroom-based activities and site visits the students were introduced to the concepts and techniques involved in the recording and interpretation of the historic built environment. At the end of the course, students had completed a Bronze Arts Award qualification.

We held a number of successful events including a bat talk in April led by Essex bat group attended by 28 people. This was followed up with a number of bat walks including one at Parklands in Havering where participants were able to see emerging daubenton’s, pipistrelle and noctule bats.

We also launched our pop-up travelling archaeology exhibition in June with Museum of London Archaeology at an event hosted by Essex Wildlife Trust. The event, Hornchurch Military Day, was part of the 75th anniversary of the D-day landings. We also popped-up at Valence House pre-history festival weekend. Both events were attended by over 400 people who were given the opportunity to discover more about the history and archaeology of the Land of the Fanns, including the Romans!!

Whilst we have focussed on the content of training opportunities and events with numbers attending steadily increasing, we aim to encourage a wider audience for delivery in 2020 and 2021.

We held another successful heritage bus tour with the Discover Metropolitan Essex group in August with 56 people on board Daisy, a 1964 open top route master! Starting and returning to Valence House passengers enjoyed an interesting (if somewhat breezy) ride around such sites as Chapel Hospital in Ilford, The Queen Elizabeth Hunting Lodge on the edge of Epping Forest and Eastbury Manor in Barking.

As part of the Mayor of London’s National Park City week in July, we held our annual BioBlitz event with Thames Chase Trust at Forestry England’s Broadfields Farm. We had support from experts with knowledge of everything from insects to plants, birds and moths, even molluscs and lichens! A big thank you to Havering Wildlife Project, RSPB, Essex Field Club, Thames Chase Trust education team and conservation volunteers, Langton’s and Havering Parks Service for supporting another successful event. It was a great day with 255 people attending. We managed to count an amazing 317 species this time Including 7, 14, 16 and 24 spotted ladybirds and a number of painted lady butterflies that were part of the ‘once in a decade’ phenomenon of mass butterfly migration experienced this summer in the UK. We submitted all our records to greenspace information for greater London.

Building on this success, more mini-beast hunting and pond dipping followed with another BioBlitz held jointly with the Land Trust at Davy Down in August.

We worked with Kinetika throughout April to June, as part of a commissioned piece of work to launch our Community mapping project. Initially we worked with partners and volunteers to map out a series of walks across the Land of the Fanns landscape, taking in a number of different heritage locations. The aim of the project is to establish connections local people have to the landscape and record their stories creatively. To help support this Kinetika ran a creative skills training day in May at their studio in Purfleet which included drawing, art journaling, creative writing and photography.

70 participants attended the walks at the end of May where we managed to gather ideas for over 100 stories. We followed this up in August with a number of drawing workshops at various locations including Warley, Bulphan and Chafford attended by 67 participants.

Lily Mackie began work as the Rivers Project Officer for Thames21 in May. Lily has been getting to grips with two of the Land of the Fanns rivers projects along the River Rom and Ingrebourne. Both projects involve a combination of improvements to the river channel and re-establishing connections between the river and flood plain. Preliminary work has involved community engagement through open days and river clean ups and the commissioning of a number of preliminary surveys to support planning applications. With the design work nearing completion we should be in a position to deliver both projects this winter.

We had success engaging with a new audience as part of the Walking the Fanns programme in May. Thames Chase walking group promoted an all abilities walk, targeted at people with disabilities. 40 people attended the walk which was at Forestry England’s, Broadfields Farm.

Langton’s House and Garden in Havering successfully completed their project to create a marshland wildlife walk and pond, funded through the Land of the Fanns as part of the Interpreting the Fanns project. This adds to a wider community engagement project at Langton’s which includes a new Natural Play Area in the woodland, new signage throughout the site and setting up a Gardening volunteer programme. Completion of the project was celebrated at an event held in Au 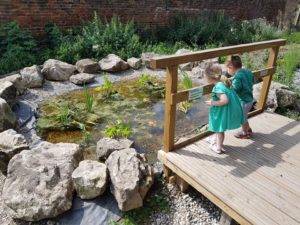 gust attended by Thames Chase volunteers, who were involved in the construction work, and local councillors from Havering.

Friends of Bedford’s park made good progress with their interpretation project, also part of Interpreting the Fanns, having purchased new welcome signs for their walled garden. Further aspects to their project include designing illustrations of 18th Century characters associated with the site, including Charles Ellis Heaton and the gardener’s wife, to help bring interpretative and promotional material to life.

We had two successful applicants for the third round of our Community Action Fund awarding another £9,200 to the following projects:

Of the five projects we funded under round two of the Community Action Fund, one is now complete, which was assistance with establishing Hornchurch Airfield museum. The other four which have made all made good progress include:

Round four of the Community Action Fund is now open until 31 January 2020 with a fifth and final round open from March 2020. If you are you looking for funding for your next project the Land of the Fanns Community Action Fund could be for you! If you have a project in mind, or you know a group who does, please let us know about it.

The fund is open to groups including schools, community groups, residents associations, scout groups, friends groups, church groups and social clubs within and surrounding the Land of the Fanns project area, for projects that compliment the wider scheme and meet some of our main objectives and vision.

£15,000 will be available through each round of the Community Action Fund to deliver projects of up to £5,000.

For more information on the Community Action Fund and how to apply visit: http://www.landofthefanns.org/community-grants/

We launched our creative poetry competition in April. The responses were high quality with12 poems received. The winner in the under 12’s category, with a poem about Rainham Marshes, was Lucy Hanford. The winner in the adult category was Dave McGough with a poem about the Ingrebourne Valley. Second and third places went to Terry Bickell and Ian Seabrook. Winners and runners up received high street gift vouchers, book token and pen and note pad

Secrets of the Rainham Marshes

Animals hiding out of sight

Making their way to the water

All blue and bright

Every animal scurries away; they are all the

Look out for further Land of the Fanns competitions announced via our website and on social media.